(The following is the obituary notice written by Hurşit Önsiper in 2020.) 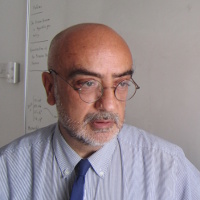 Cem Tezer, a truly outstanding member of the mathematical community in Turkey, a scholar of amazing diversity passed away on February 27, 2020. He was a distinguished mathematician and a teacher with remarkable energy and enthusiasm. In written expositions, numerous conference-seminar talks and in private discussions he generously shared intriguing ideas, questions in mathematics, history, literature and music.

Cem Tezer, received a B.S. degree in mathematics at Cambridge University (1976) and earned his Ph.D. degree at Heidelberg University (1984). The influence on Cem Tezer of the rich cultural, historical and academic heritage he observed in these two outstanding institutions, was the main source of inspiration in his academic and intellectual work. This overwhelming influence led him to a principle which he employed at each stage of his mathematical research; "study only the classical works of the true masters of the field". He was keen to avoid "reader friendly" mathematical expositions. He was also critical of fashionable techniques most of which did fade away very rapidly without leading to any substantial progress.

Cem Tezer adored mathematics as a human endeavor. He did not try to comply with the dominating academic attitude formulated in the cliche "publish or perish"; on the contrary, his attitude was that of the masters - few but ripe. His research articles span four basic fields, namely topological dynamics, differential geometry, mechanics and elementary geometry. I always had the impression that among these fields, elementary geometry was his favorite; he quite often emphasized the neatness, simplicity and the beauty of the ideas and the techniques in elementary geometry.

The ideas, the methods and the results in each and every research article of Cem Tezer deserve a careful investigation, which I believe will lead to further interesting research.

Cem Tezer had great interest in the history of mathematics pertaining to the (late) Ottoman era. Combining his deep mathematical insight with his competence in the language and the script in which the articles were written then, Cem Tezer contributed significantly to the studies on the mathematics of that period. On several occasions he was invited to Dil Tarih Coğrafya Fakülltesi at Ankara Üniversitesi (one of the leading departments of history in Turkey) to teach graduate courses in the field.

Literature and music were two other endeavors which fascinated Cem Tezer. In his poems (overwhelmingly in Turkish, a few in English) and in (unpublished) articles on Turkish literature we again observe how keen he was to prefer the classical over the fashionable. In his poems in Turkish, Cem Tezer almost invariably followed the classical tradition, using the rich late Ottoman era language and style. He derived his inspiration from the masterpieces of Divan Edebiyatı.

Cem Tezer was about to complete a trilogy on three of the most influential and controversial Turkish poets; Yahya Kemal Beyatlı, Tevfik Fikret and Mehmet Akif Ersoy. I believe that even though the finishing touches of Cem Tezer are lacking, these articles are of great importance as terse comparative essays on various social, cultural and literary attitudes prevailing in the Ottoman Empire and then in the Turkish Republic in early 20th century.

As for his passion for music, I still remember vividly the joy and the pleasure of listening to Cem Tezer rehearsing the flute in the Department occasionally, late in the afternoon. A fond memory from the early days of our tenure at M.E.T.U...

I know that this article falls short of reflecting the passion and the accomplishments of my dear friend Cem. If he were to read it, he would point out many shortcomings and most likely would say "kağıt sabırlıdır !"